Sharon Rose Masters Se-jin Song and Laura Avalo carry out Atomy business both online and offline in Mexico, the 13th largest country in the world and 19 times the size of Korea.
Song and Avalo believe that Atomy is the best economic model in life and conduct web seminars with around 300 people every day. 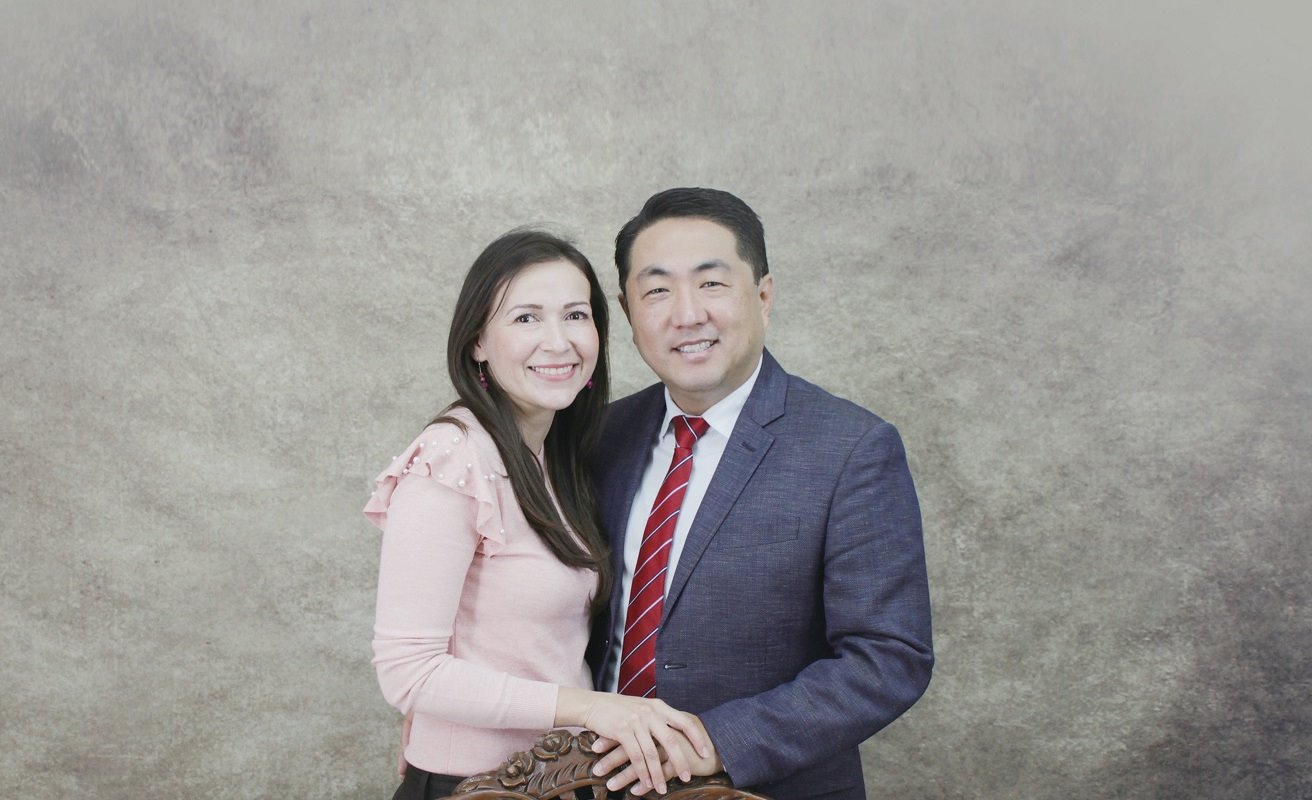 Learned About the Products First, Used for Two Years

Sharon Rose Master Se-jin Song followed his parents to Paraguay as a child.
In 1999, he met his wife, Laura Avalo, and settled in Mexico.
When Se-jin Song, just turning 20, first encountered network marketing, he was sure the business was profitable.
But he had negative perceptions about network marketing after having seen people be hurt by the unprincipled.
More than ten years went by, and the couple encountered Atomy like it was fate.
They visited Korea in 2012 for their children to study Korean.
Song's family lived in a building housing an Atomy Education Center.
His wife, Laura, couldn't speak the language, but she used her body language and a calculator to purchase products.
She became a regular buyer for over two years.
By the time he was to return to Mexico, he was introduced to the Atomy business but did not take the offer.

Atomy Products, Popular in Mexico Too

"Returning to Mexico, Master Song started a livestock feed business.
He was under considerable stress for the business required implementation of new technology.
The burden got heavier as his debt increased, but he couldn't quit because of his commitment as the head of his family.
One day,  he met an opportunity on his business trip to Mexico City.
He was asked by an acquaintance to work as an interpreter during the free time.
He then heard about Atomy, a company he had forgotten about, in the taxi to the venue for the event."
"I heard that there was a very good toothpaste. When I asked if it was Atomy toothpaste, he said it was.
It was surprising to hear about Atomy toothpaste all the way here in Mexico.
I had heard that Atomy was an international company, but it was still a surprise to hear about it in Mexico.
A few days earlier, I had heard that Atomy Mexico opened and that Chairman Han-Gill Park had visited.
This time, I went ahead and asked to sign up as a member."
After the registration, Song stayed up three nights to research Atomy.
He felt this company was different.
Anyone can make a profit just by spending and introducing Atomy business to others without doing any harm if they adhere to the principles properly.

Up to 300 Participants in Two Online Lectures a Day

Making the decision was the hardest part.
The couple went all-in with Atomy thereafter.
Avalo explained products and built relationships with the business owners, and Master Song was in charge of managing the group.
They were able to get twice as much done as they had started the business as a couple.
Although they each took charge of their own team and expanded their scope of business, limited time and money and distance between regions were challenges to be overcome.
"It takes one to five hours by plane to travel from region to region in Mexico.
I was thinking about how to get as many people as possible in one place for Atomy, and I came to a conclusion: I could do it online."
Online, they were able to meet consumers and business people from all over the country and even network with people across Latin America, regardless of time and place.
The number of attendees of their web seminars, which started with 10-20 people twice a week, has increased.
Currently, about 300 people participate every day.
"Online education programs have now found their place, but at first, the couple was not used to explaining their business online.
This was when Atomy's 'Super-Synergy of United Heart' worked.
He gathered partners that worked well with him one by one, formed an online team, and planned a program.
In the morning, product descriptions and correct usage, how to write life scenarios, basic center training, and Hallyu culture training programs are held.
In the evening, vision lectures and organization management methods are provided.
Mexican business members particularly enjoy the Hallyu culture program.
The strength of this program is that it introduces K-pop and other parts of Korean culture popular among Mexican people to create a sense of familiarity.
A new idea was proposed by the online team to help participants stay engaged: add a fun element.
Toward the end of the online training sessions, participants would be quizzed on what was discussed that day.
The person who answers correctly would win a prize."

Sharon Rose Master Se-jin Song, who tried many different kinds of businesses before meeting Atomy, said that Atomy is the easiest business he has ever done.
They think Atomy is the best business that can be started without capital.
The couple dreams of becoming the first Imperial Masters in Latin America.
"The reputation of network marketing in Mexico isn't the best.
Although Mexico is one of the ten largest direct sales markets in the world, many have been disappointed by several network companies.
People here think that even if a product is good, the prices tend to be high.
But that isn't the case with Atomy.
I want to let people know about that difference all throughout Latin America and throughout the entire world.
I believe that that's my duty and responsibility as an Atomian."
Sharon Rose Masters Se-jin Song and Laura Avalo, conducting online product training. 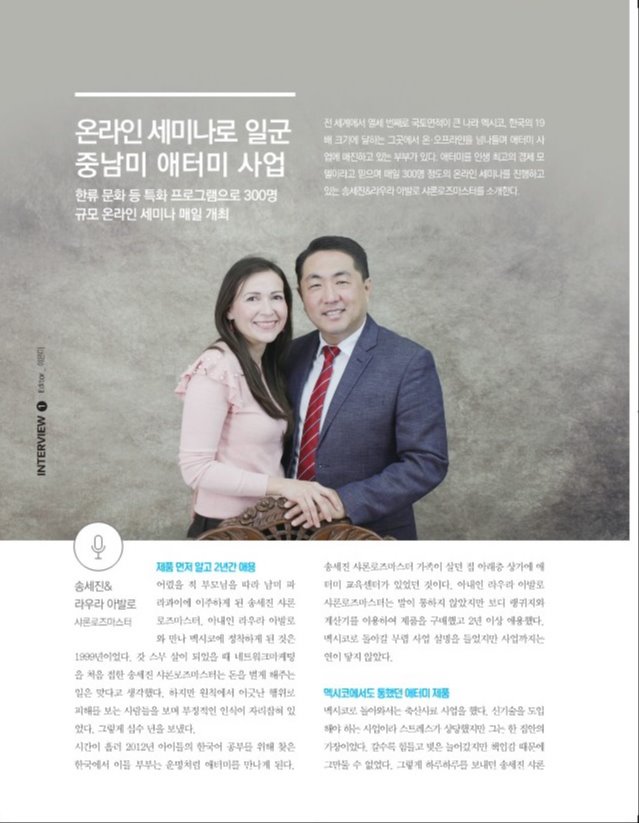 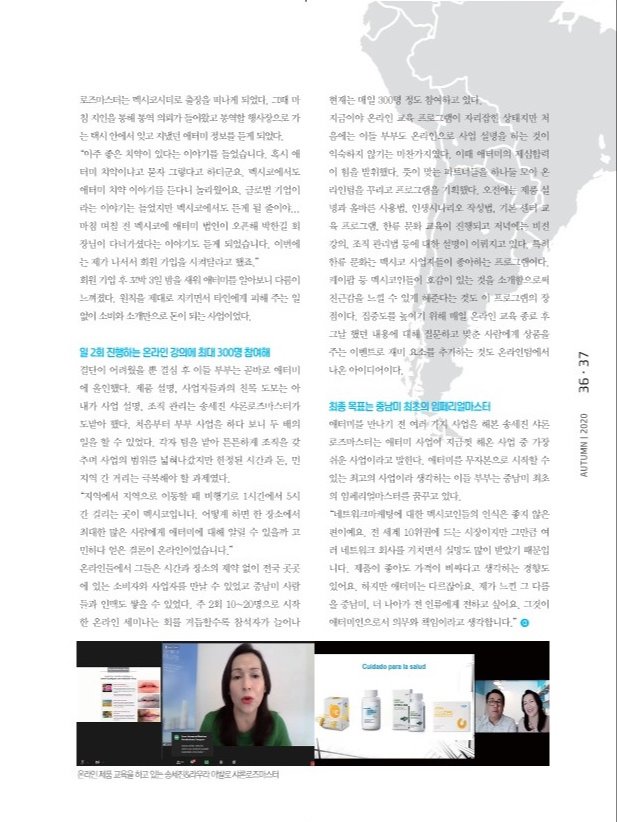